Hi guys,
I just thought to put up a small sum-up of my miniature painting that started , well, one year and a half ago. But since I took a break off painting for 4-5 months , it's pretty much on the 1 year mark. So, here's what I've got painted so far: 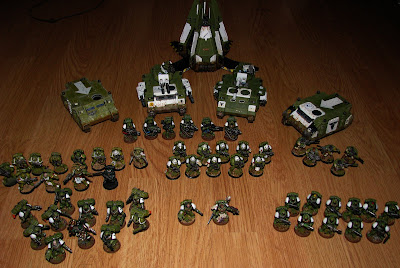 Vehicles
1 Drop pod
4 Rhino Chassis , 3 of which are magnetized and can be fit with Predator sponsons and turrets
All the weapons options for predators magnetized (main guns, sponsons bot heavy bolters and lascannons)
Door sets for the Rhino chassis just in case I don't use them as Predators.

Here are some detailed shots of everything:

These are my first painted marines. The one in the right with the double plasma pistols is my first model. As you can see, there is not much unity in these guys, mainly because on each one I tried a new painting technique and then decided to stop in order to have a summary of what went well and what didn't. Also, these are mostly AoBR marines, with a few exceptions. 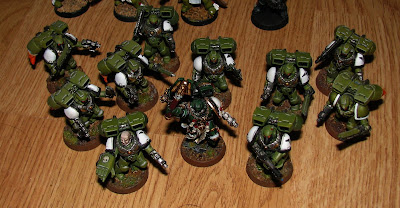 This is my assault squad, 5 of the marines have some green stuff work on them in order to create some jetpack flames. The chaplain in the middle was my first painted metal model and helped me change the techiques I have been a lot, mainly because I didn't want to mess it up :). Here's a close-up of the model.

Following is the squad where I finally decided on a proper color scheme for my army. These guys were made also to stand in for a Sternguard squad in case I ever need one.

Next is another tactical marine squad that I painted because I needed some extra marines for games. This is also the first squad that I used edge highlighting on. 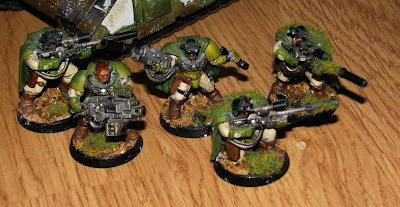 This scout squad provided a much welcome break from the standard armored space marines and gave me the opportunity to learn about cloth and painting faces. On the snipers I have made extensive use of drybrushing and washes to give the clothing a somewhat natural look. It went ok for most of them.
On the heavy bolter scout I tried to use layers to create a more realistic face, instead of using washes and drybrushing as before, and it paid off.

In the next picture we have a sergeant for the sternguard/tactical squad and my librarian conversion. The sergeant has one of my first good face painting jobs , following the example of the heavy bolter scout. 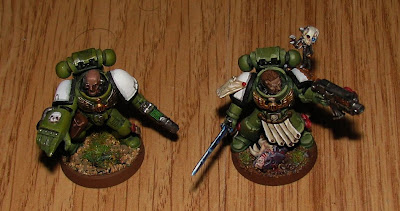 Heavy weapons are always fun, because they are huge, are easy to assemble and you can paint them in all kinds of ways. For the weapons I tried various effects such as highlighted or glowing wires, glowing plasma exhausts, etc.
Also, these models is where I started to freehand my chapter logo on the shoulderpads. Following this squad I have went over older models and put logos on their shoulders.

On to the vehicles, this is my first painted and assembled Rhino. It has some assembly problems, but much of them have been covered through painting. This model is the only non-magnetized chassis that I have. All others can be converted into a Predator.
The hatch tactical symbol is painted by using masking for the arrow with a brush over sticky tape. 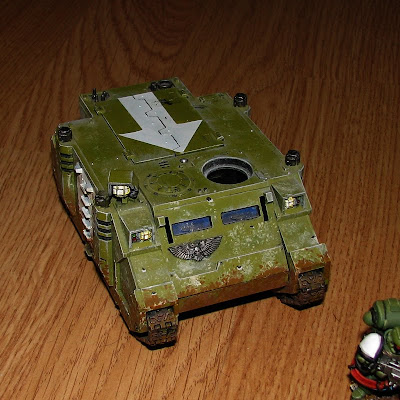 This chassis was completed long after the 1st one. Here I used my chapter colr scheme, and I finally stopped fumbling with colors painting large surfaces. This is the first model that I weathered with mud using several layers of brown colors, technique that I applied on all my other vehicles. 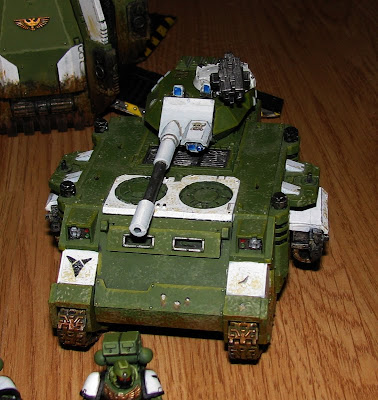 The following 2 pictures are my latest rhinos/predators. I tried to use several new techniques, such as nmm , minor plasticard conversions. I tried to do some hazard stripes on the extra armor plating but I failed miserably, so I decided to make them all black and spam some decals :) 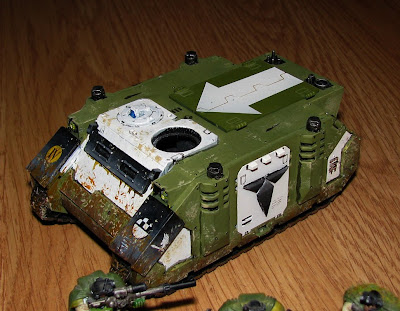 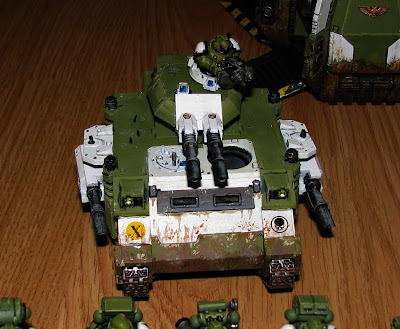 And last, but not least, the drop pod. It's the single most difficult to paint model that I had to do so far (I have 2 land raiders to assemble though, so it might get knocked down to 2nd place ). The plastic is of amazing quality, everything fits almost without gluing stuff and it also requires a great deal of attention during the last assembly phase. 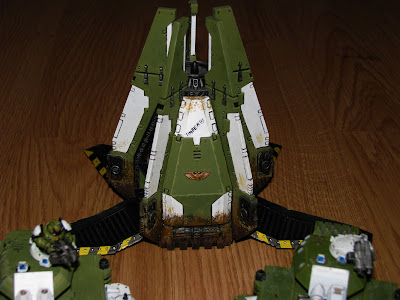