Drop pod part 2 and a celebration

I have finished doing the basic metallic drybrush on the drop pod. It's a great model, the best I've assembled until now as far as how everything fits together. The pod in the picture has many pieces that are not glued together, and is stable enough to handle and test various things.
The assembly instructions are lacking one small detail: the marine harnesses need to be placed on the pod's floor together with the central console, otherwise you would have to cut some of the plastic in order to place them correctly. This is what happened to me while building this drop pod, but it's not noticeable by any means. 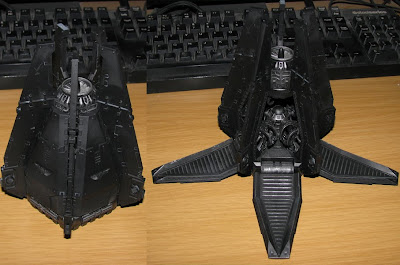 Also, if you want to have a good looking painted pod interior you may want to paint the harnesses and the console BEFORE glueing them to the pod's floor, otherwise you won't be able to reach the console with your brush.

The picture above is the 100th picture I am uploading to the blog after about 1 year since I've started painting miniatures. It's not 1 year yet, but we're getting close. It's quite nice to see how much one person can progress from absolute 0 to .. more than that just by practicing and dedicating some (not a lot) of time to a certain field. So I guess the moral would be that anything can be learned up to a point if one practices enough.
Posted by v at 11:52 AM