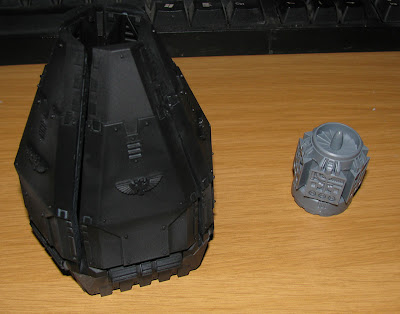 I got a new transport in the mail today that had 2 Drop Pods and a Land Speeder Storm, so I quickly tried to assemble one part of the drop pod, namely half of the interior. Much to my surprise, I failed to see some of the hints that the assembly guide showed me, such as gluing the panels on the top turbine upside down :) Oh well, now I'll have to live with a little strange drop pod.
One nice thing about the drop pod is the turret mount. That should not be glued to the rest of the turbine, because it can be fit with 2 weapons and it can rotate freely. Combine that with a spiral pattern on the turbine head and it should make for a great showpiece :)

Also, I have a few ideas how to magnetize the weapons to make the pod even more flexible (not that anyone would actually USE a Deathwind launcher , but still)
Posted by v at 2:17 PM